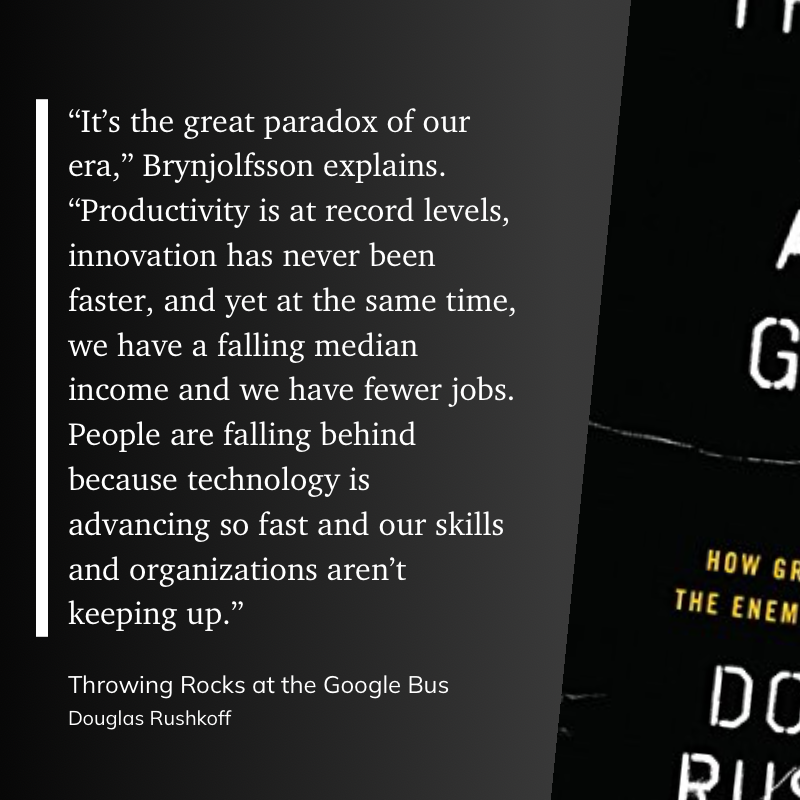 It is telling that someone like Doug Rushkoff can write these words;

Only individuals who create value for the company are awarded new stock proportionate to their contributions.

... without questioning the principle.

The corollary is of course that there are people that work inside a company that don't add value, which for yours truly is of course like a 'red rag to a bull' - because as the title of this post suggests, if you are employed by a company and not adding value to that company - then why are you there?

‘Stakeholder capitalism’ is the buzzword du jour for business practices that strive to achieve more than profits and a high stock price.

If you want to read more - you can:

To be fair, the idea of 'Stakeholder Capitalism' has been around for several decades, although who actually coined the term is up for debate, with names including Klaus Schwab (Founder and Executive Chairman of the World Economic Forum), Peter Drucker and Tom Peters.

Still wondering? This is not a bad primer.

So yes - it is not a new idea - it's just that as the world's conversation is moving into fairness and equality, as we see a (kind of) resurgence of Unions and as 'capitalists' are pushed into the corner of 'defending their position' ... the term is emerging and arguably being positioned as the logical next step for a 'sustainable economy'.

I wrote about this over three years ago when I shared a Ted Talk from Nick Hanauer. Today, that video has had over 5 million views. At the point of 'first discovery', I had not heard of Nick - but as I pointed out, the principles of what he was talking about are engrained in People First thinking.

Today, you can hear the same language when people talk about DAOs in the world of 'Web3' and quite a few other places.

But then many steps before 'Stakeholder Capitalism', there was something called 'The Cooperative Movement' which got its start in 1844 in Rochdale a small town in Lancashire, England.

So far, I have not read anything that clearly articulates the distinction between Stakeholder Capitalism and Cooperatives and which and why each might be better or worse than the other. Sometimes I wonder if 'cooperative' is too 'radical' in this world - so we keep inventing new words to describe the same thing.

So, picking on a random target company like Uber, which despite hanging its hat on 'the sharing economy' is actually 💯 an 'old thinking' capitalist company.

Now consider a company called ATX Coop Taxi - a cooperative taxi service based in Austin that has been around for over 5 years. NO - they aren't as well known - but their service is a 'cooperative'.

The question is why hasn’t it taken off?

That is for another time.