A friend and reader of this blog just sent me this link, which is a third party version of the LinkedIN map below. It seems to be limited due to LinkedIN's API constraints, so it can't map more than 499 of your connections. That said, there does seem to be a lot more information and analysis that surrounds the graph. Andy it means YOU can go try it out on your network. Thank you David.

A good friend of mine messaged me through LinkedIN. He is a fast thinking, witty, bright, intelligent, big thinking kind of guy. He's also interested in his next gig - so let me know if you want an introduction. Anyway, to my point. He had been on my LinkedIN profile and commented;

I think you would be well served to pare that list (of skills I had listed in my summary) to maybe 4-5 distinct and specialized areas where you really shine better than the rest. Things like Leadership, Marketing, Communications are too generic and readily available in the marketplace.

And I agreed. In fact, so much so that I pared it down to zero. My skill list is summarized in another part of the profile anyway. But it got me to thinking.

I am a big fan of Mike Pesca over at Slate who delivers a daily podcast called The Gist. Try it. You won't regret it. A couple of weeks ago he had Eric Weiner on as a guest, and they spent some time talking about where genius comes from. Turns out that Eric has just written a new book about 'how genius happens'. One of my takeaways was that genius emerges from generalism - not speciality. For example, he talked about the fact that Einstein was not the most knowledgeable physicist of his time, but his value was that he was broad in both interest and knowledge. A 'Renaissance man' if you will. This an absolute opposite to what we live with today. We eschew the 'polymath' in favor of the 'monomath'. From the site Gain Weight Journal;

Unfortunately, we live in an era of monomaths now. This means specialists. The problem with that is that people get stuck with one way of thinking, they have blinders on, and cannot see the big picture, including the relationships and similarities between different things.

I know, even our education system is driven to a singular focus and it seems to be getting worse. For myself, I focussed on Maths and Physics in my education from the age of 15. Maybe I was bored. Maybe I could see the future, but despite that formal focus, I did put an effort into ensuring that I didn't get locked up in that world and miss out on everything else that there was to offer. (Though I probably shouldn’t have read all three volumes of Lord of the Rings over a two week period shortly before some year end exams!). Back to the plot. Reading that quote reminded me of what we used to say back in my Group Partner days ... "The Last Thing You Ever Need Near A Problem Is An Expert" Good. Because I am not. LinkedIN 'Labs' used to run something that visually mapped your connections so you could see clusters of people in your network. They closed it a while back, but at the time I wrote about it, dubbing it 'Cloud Hopping'. I also observed that most people had a very tight network of very few 'clouds'. This was mine.

A highly distributed interconnected network, emerging from European and American networks in finance, technology, application  and social disciplines. I think Derek was spot on. My strength is not my speciality. My strength is my generality. And, while I would absolutely not describe myself as a genius, I am definitely a cloud hopper. A connector. And there are not many of us around, or at least we tend to keep quiet, because we live in an age where value is placed on 'what you know'. The 'who you know' is almost written off as 'the old boys club' . But once you understand the value of the role that Gladwell calls out in The Tipping Point - the pieces fall into place.

I first published this post on Beyond Bridges on February 10th, 2016. That site has gone, the words archived,

"This time he was here to help us understand some truths about how we really run the business, make decisions, and value what's worth doing. When I say value, I don't mean a list of generalized "values", or the bullshit phrase of "adding value", but how we attribute value when evaluating our options and making tradeoffs."

Verifiable credentials are coming as a service; it's a proven business model | Constellation Research Inc.

The Stripe co-founders were candid about their failure to predict where the economy was heading. They also said they overspent on things like “coordination costs.” That’s not a term I’ve heard before, but I suspect it is a reflection of getting too big and too inefficient.

It's a new term to me aswell - BUT recently on LInkedIN there was a meme running around - which used this graphic. 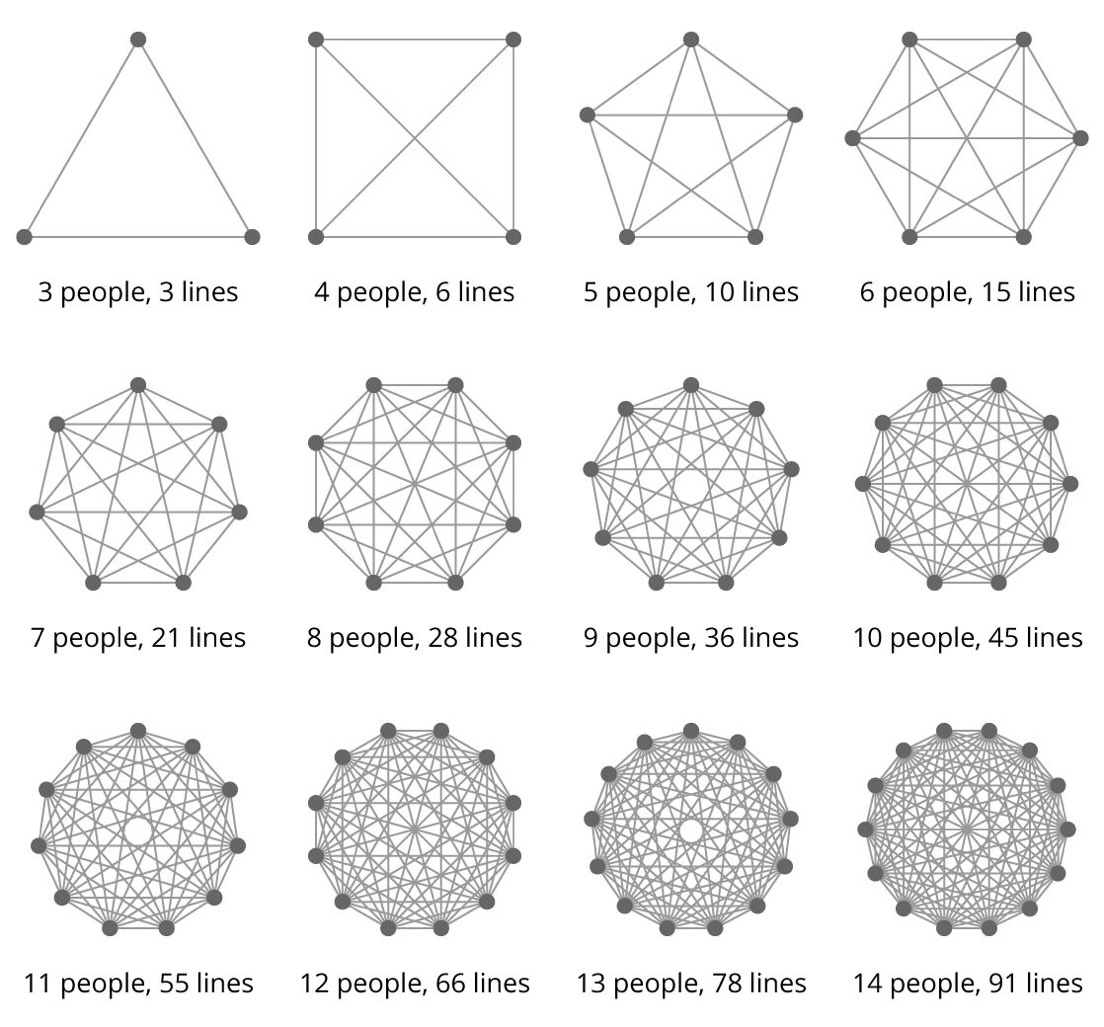 And adding 1 person to a 10,000 person organisation adds 10,000 possible new lines of communication.

Josh Bershin writes that we are becoming a power skills economy.

In other words, automation did not eliminate work at all – it created new jobs, better jobs, and an acceleration of our workforce into what we now call the “service economy.” We are essentially shifting to the right in this model.

BTW, in case you are wondering, ‘Power Skills’ is the 'new' name for ‘Soft Skills’. To be fair, it did need a new name. It’s also fair to say that whilst he’s not wrong, he fails to mention that in the last 15 years (where he references 2007) no mention that the average income of people is flat and that real income is declining.

But that's a different opportunity. 1) Becoming? I think it is really more like that we are starting to recognize these skills. They have always been there - and though not necessarily recognised or even understood - I bet if you find successful people in that 'old' economy - they would demonstrate a lot of these traits.

2) Josh is not alone in highlighting these skills and their importance. What nobody is doing is organizing these skills into a taxonomy - much less an ontology.
(What's the difference you may ask) Stan Garfield has a very simple explanation) 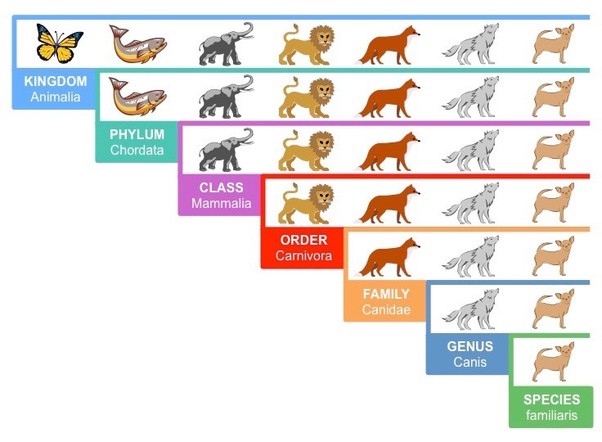 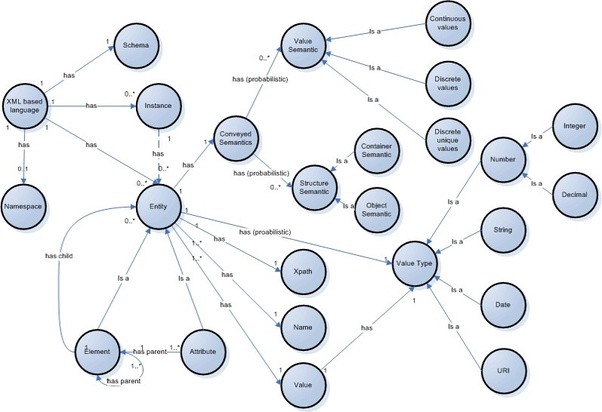 More of this to come, but have to say, very excited by a company I have been talking to that has not only done a lot of research into these skills, but also which skills are most important - and why, depending on what you are trying to do.

Not only that, but they are releasing an app that will allow anybody to

I was delighted to be joined on the People First podcast by Ramsey Avery who is the Production Designer for the Amazon series - Lord of the Rings - Rings of Power.

Wonderful conversation that I know you will enjoy. 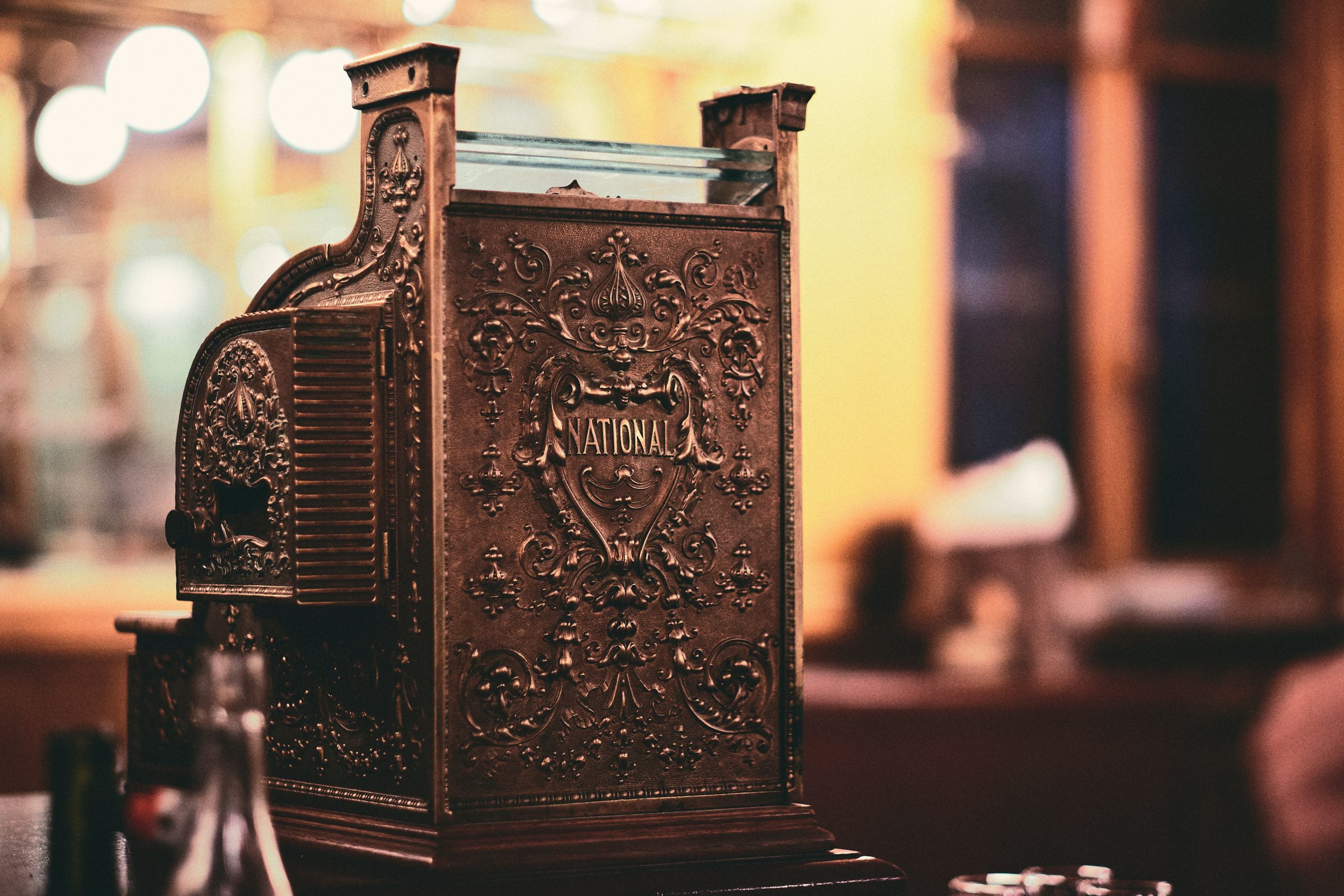 It’s funny how 'xx is the new oil' keeps cropping up … this one is kind of related - but focussed not specifically on data - but rather, The ‘Attention Economy’ ….

"For the better part of the past century, the most important commodity has been oil. Wars have been fought over it — Pearl Harbor was a preemptive strike to secure Japanese access to Indonesian oil — and it elevated desert tribes to the ranks of the wealthiest cohorts in history. But the sun has passed midday on oil’s supremacy. We’ve moved from an oil economy to an attention economy.

We used to refer to an information economy. But economies are defined by scarcity, not abundance (scarcity = value), and in an age of information abundance, what’s scarce? A: Attention. The scale of the world’s largest companies, the wealth of its richest people, and the power of governments are all rooted in the extraction, monetization, and custody of attention."

Some other phrasing that caught my eye and mind …

"If Facebook is Exxon and Netflix Shell, TikTok is fracking king Chesapeake Energy, the rule-breaking insurgent armed with novel extraction methods that threaten the established order.”

"everyone is trying to outTik the Tok”

"MrBeast … most popular video (is) a real-life reenactment of Squid Game, which cost $3.5 million to produce (the cost of an episode of Mad Men). It received 300 million views."

You can read the whole Scott Galloway piece here.

No - not the 🎶 pop group - they were 'NSYNC' ... just an acknowledgement of how nice it is to find like minded travelers on the journey.

The quote below found here

“We need to resist the narratives that are frequently served to us by corporations that sell these technologies, that these models of the future are dependent upon the particular technologies that they’re selling, that it’s always some future that is just around the corner that we have to buy into, when in fact the future is already here.”

Unpacking the Potential of Web3 Publishing - Tokens, But How?

Know Your Value So You Can Charge What You're Worth